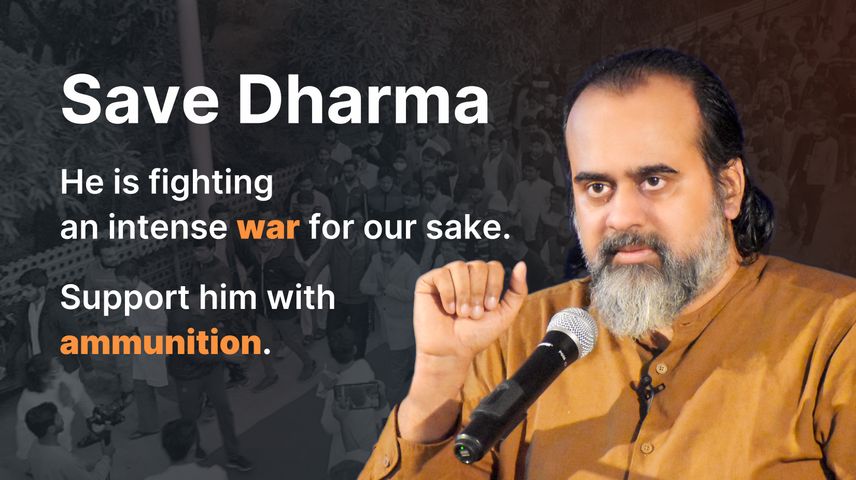 Have you benefited from Acharya Ji's teachings? Do you want Acharya Ji's voice to reach millions and billions of individuals? Do you wish to see that the goal to which Acharya Ji has dedicated his life is realized?
He is fighting this battle for you, it is you who benefits from his hard work, only through your contribution will this mission move forward.
Requirements of the Foundation

Achieved : ₹ 81,17,111
(32%)
To be raised : ₹ 2,50,00,000
4488 Donors till now
146 day(s) left
The reason why Acharya Ji was able to reach you is that right from its inception the Foundation has spent 80% of its resources on publicity. Due to this, we are able to spread the Truth fiercely in the country and abroad, but after doing all the work, we are not left with any money or spare resources. This is a war that squeezes out even the last drop of our strength.

There is a strange irony: a Foundation promoting peace around the world is unable to provide a peaceful place for its own work.

This necessary work can be done only with your cooperation. That's why we have come to you with an appeal for financial support.

Required Funds for August'22
Achieved : ₹ 1,01,206
(1%)
To be raised : ₹ 1,00,00,000
37 Donors till now
24 day(s) left
You can financially contribute to the smooth functioning of several departments within the Foundation which makes it possible for us to spread Acharya Prashant's wisdom in its purest form every day.

But keeping in view the need of the hour, we want to increase the pace of the mission. For which more resources are needed every month.

Requirements for the month of August
Achieved : ₹ 68,553
(14%)
To be raised : ₹ 5,00,000
34 Donors till now
24 day(s) left
Our pledge is to reach out to 20 Crore households with Upanishads and their interpretation.Sanatan Dharma is Vedic, and the essence of the Vedas is in Vedanta. The Shruti Pramana which is necessary for any matter related to Dharma to be valid and acceptable, that Shruti Pramana is also practically Vedanta Pramana.

A religion cannot exist without its central scripture, otherwise, the arbitrariness of the confused ego will run in the name of religion. Where the world is standing on the verge of explosive destruction, it has become imperative to bring out the real religion.

Last year, we started an intense campaign of "Ghar Ghar Upanishad" only to give you clarity on Sanatan Dharma.

This is the least we can do, right?

Bhagat Singh surrendered himself to the police after the Central Assembly Blasts of 1931. It was not necessary for him to surrender, several times in the past he has dodged the police. Now, why this time he surrendered and chose the noose on his own?

When he was asked about his decision, he said, 'I am dying because only after my death this revolution will reach the masses. If I remain alive then only a few people will be affected by my efforts, but if I became a martyr, then my message will reach out to crores of people. That's why it is important to choose the noose at this point.'

So great is the importance of publicity in social work! Your organization also devotes 80-90% of its time, energy, and resources to the publicity of its socio-spiritual revolution. Acharya Ji has always said that lies spread by themselves but truth has to be nurtured and publicised.'

Acharya Ji has been speaking of this strength-giving and liberating truth for last decade. However, it is one thing to speak and totally another to publicise it.

For your information, it costs us 25 to 50 rupees to reach out to one individual for once with Acharya Ji's message. If we consider all social media platforms, then around 100 million unique users listen to Acharya Ji regularly. Out of all these unique users, most of them have not come on their own, rather they have been brought to Acharya Ji with due diligence and effort.

Bhagat Singh was indeed great. Like him, probabaly we can't die for the revolution but we are sure of this that we have devoted our life completely to the service and publicity of truth. Falseness, weakness and suffering are spreading at an unimaginable pace—they need to be defated and this is our mission.

Just as we have brought the truth to you, would you like to help us in reaching out to more people like you? It costs minimum 25 rupees to reach one individual for once and it is needed that this message reaches out to billions of individuals.

To put it simply—we need resources. Just to reach out to the citizens of India it would take crores of rupees.

We are ordinary people. Probably we can't give away our lives, may be we can't devote our entire lives to the mission. But we can atleast whole-heartedly donate for the publicity work of Acharya Ji's message.

This is the least we can do, right?

This work is for you and it needs your support.

Do you know how Acharya Prashant reached you?

Do you know Acharya Prashant gave his first discourse on Shrimad Bhagavad Gita in 2006? 15 years ago from today. And since then Acharya Ji has been regularly speaking in discourses so much so that more than 60 books have been printed, and about 300 more books are ready to be printed.

Speaking in discourses from 2006 yet YouTube channels started after 5 years and 8 years, i.e. in 2011 and 2014, why? Because Acharya Ji did not focus on publicity. Even after the channel was made, the discourses were recorded using a simple mobile or a handycam - sometimes in an ordinary room of BodhSthal, and sometimes on a deserted mountain. Acharya Ji would simply sit in his usual clothes and continue to speak in his meditativeness without caring for the camera.

As of 2018, there were 4000 videos on the channel, and only 3000 subscribers! Then from 2019 onwards some of Acharya Ji's well wishers and listeners started actively working for the Foundation. A good amount of money was invested in improving the audio-video recording quality, on creating the right studio-like environment, and on professional editing and audio-video technicians. And then it was clear to everyone that in this day and age, Acharya Ji's teachings can't reach out to the masses without heavy investment in publicity and promotion.

Somehow the Foundation continued promotional activities by raising funds. A large sum of funds is needed to increase the 'reach' of the videos. In today's time, pure and truthful teachings can't be spread without heavy publicity. To ensure that our voice reaches you the Foundation bears a lot of expense. As a result of the same, today more than 1.5 million subscribers have been able to connect to the channel.

But if we want to propagate Acharya Ji's message with the same intensity with which the Foundation has been working to publish Acharya Ji's videos then it will require A LOT of funds for publicity.

Till today, Acharya Ji's voice reached you because someone else had financially contributed to the Foundation. Otherwise, till 2018 there were only 3000 subscribers! And we are delighted to see you getting benefit out of all the videos the Foundation has been able to upload.

Have you benefited from Acharya Ji's teachings? Do you want Acharya Ji's voice to reach millions and billions of individuals? Do you wish to see that the goal to which Acharya Ji has dedicated his life is realized?

Don't forget that if Acharya Ji's teachings are not reaching you and others, then internal tendencies and external forces which are trying to put your mind, life, nation, and religion into deep darkness are already at play. Flame of this burning candle can save you from darkness but except YOU nobody else can protect this flame.

If you love Light more than darkness, then contribute as high as possible to the Foundation. The Foundation does not expect even a single rupee for its personal benefits but we require resources to achieve the truthful and courageous goal we have set for ourselves.

We are fighting this battle for you, it is you who benefits from our hard work, only through your contribution will this mission move forward.